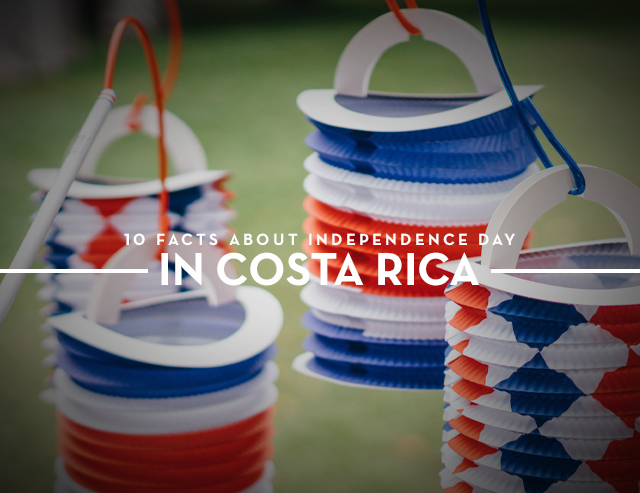 September 15th is Costa Rica’s Independence Day. For those of you that haven’t had the chance to visit us during the celebrations, we want to share some fun facts to help you feel like you’re at the party.

1. Costa Rica Shares Its Independence Day with Other Countries

September 15th commemorates the day that Costa Rica became independent from Spain, along with the other Spanish-speaking countries in Central America to the north: Nicaragua, Honduras, El Salvador, and Guatemala. They share not only a language, but also Independence Day.

2. The Passing of the Torch

As part of transborder celebrations, the Torch of Independence has been carried through Central America each year as a symbol of unity and liberty. This tradition was created in 1964 by a Costa Rican named Alfredo Cruz, who was inspired by a local torch passing in Guatemala.

September is the “Mes de la Patria,” or Homeland Month. Schools, businesses, hospitals, and homes are decorated with national symbols such as banners, flags, flowers, and, of course, bags of coffee.

4. Fireworks Are Not the Main Attraction

Costa Ricans celebrate with fireworks throughout the year: national holidays, New Year’s Eve, Christmas season, weddings, local festivals, and more. It’s not unusual to look up in the air on a Friday evening and see colorful explosions in the distance. Independence Day celebrations focus more on civic education and the honoring of Costa Rican traditions and national symbols.

5. Lanterns ARE a Big Attraction

On the evening of September 14th, thousands of schoolchildren carry homemade lanterns during parades at dusk. It’s one of the country’s most cherished Independence Day activities. The designs range from simple accordion shapes to complicated versions of Costa Rican patriotic symbols.

If you didn’t know that the Costa Rican flag is red, white, and blue, after the Mes de la Patria, you definitely will! Beyond decorations, it’s common to see storefronts, ads, and more with these coordinating colors. During celebrations themselves, Ticos and Ticas dress up in patriotic colors with traditional touches such as bandannas and chonetes, a white hat worn in the field.

7. A Focus on Youth and Family

Many of the Independence Day celebrations in Costa Rica are designed for and executed by children and young people. This includes parades and other activities, such as folkloric dancing and playing traditional instruments. Parents, grandparents, aunts, and uncles attend and cheer on their loved ones. This is very much in keeping with the country’s belief that the family is a “fundamental element of society,” as described in the Costa Rican Constitution.

Decorations and lanterns reflect the diversity of national symbols that the country calls its own. They include: national birds, flowers, and animals; symbols of the agrarian past, such as coffee bags, coffee beans, and ox carts; colonial clothing, including leather sandals, bandannas, ruffled blouses, “chonetes,” and tiered skirts; and patriotic images, such as the flag and the national seal.

9. The Sloth Is Not Our National Animal

Neither is the tree frog, capuchin monkey, or jaguar. The Costa Rican national animal is, in fact, the white-tailed deer. They can been seen in the tropical forests of Guanacaste, as well as in national parks in other parts of the country. They are easier to spot on the 1000 colones bill!

Do you have a fun fact about Costa Rica? Let us know!